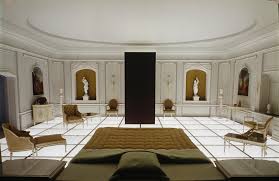 Stanley Kubrick once said that “most films are little more than stage plays with more atmosphere and action.” Going beyond the relationships between a scene and a sentence, the director relied on an expanded definition of film grammar to underpin his stories: The lighting, sets, and props acted as commas, semicolons, and dashes to join his narratives and define their rhythm. In an exhibition about Kubrick at London’s Design Museum, which runs until September 15th, it’s these environments—and the meticulous research on which they were based—that take center stage. There’s a model of the war room from Dr Strangelove (1964); a re-staging of the Korova Milk Bar from A Clockwork Orange (1971); and drawings, paintings, photographs, and diagrams from each of his films.

Kubrick often sent teams of people around the world to measure and photograph locations—from precise documentation of New York streets to tens of thousands of location-scouting photographs for Kubrick’s unmade film on Napoleon Bonaparte. The director recreated these real-world locations in London studios in part because of his fear of flying, but also to have command over every element of the set and make use of it as a narrative device. Kubrick’s stories may have had a degree of abstraction, but they were never lacking control. More interested in raising questions than providing answers, the director was driven by an interest in symbolism and the subconscious, considering an emotional response potentially more powerful than an intellectual one.

Before Kubrick started making films, he made a small living playing chess for cash in New York’s Washington Square Park. The nature of chess as a game that requires strategy and big-picture thinking made it a logical precursor to his approach to film. The ability to maintain control, to move artfully and tactically from beginning to end, mirrors the exacting attention to detail that defines his filmmaking.

Around the same time, in the mid-1940s, Kubrick started working as a photographer for Look magazine, which informed his approach to composition and mise en scène. In an interview with Michel Ciment for the book, Kubrick (1983), the director emphasized: “To make a film entirely by yourself, which initially I did…you must know about photography.”

Never one to shy away from a challenge, Kubrick’s intention in 2001: A Space Odyssey (1968), was to create “a visual experience, one that…directly penetrates the subconscious with an emotional and philosophic content,” he told Playboy in 1968. The sci-fi flick was filmed during NASA’s Apollo missions, and the set had to outpace emerging technology to successfully look futuristic. Alongside art director John Hoesli and cinematographer Geoffrey Unsworth (and later in production, John Alcott), Kubrick meticulously researched NASA’s design and employed a team of astronomical artists, aeronautics specialists, and aerospace engineers to design the spacecraft interiors. Dialogue is scattered sparsely throughout the film—totaling only 40 minutes over two hours of film—so the sets, props, and costumes play a prominent role, drawing viewers into the atmosphere of the film and its vision of the future.

Conversely, A Clockwork Orange utilized real locations, in particular London’s Thamesmead estate, a utopian social housing project built in the mid-1960s. The Brutalist architecture was the backdrop to much of the action, and its position as a project meant to represent the future of cities made it a fitting space for a film that was as much a social document as it was dystopian science-fiction. It was also cheaper to film there (Kubrick’s budget was considerably smaller after 2001), but shooting in London suited his creative aims, to show a future already being shaped in the present.

Although set in Vietnam, Full Metal Jacket (1987), was also filmed in London, the battle scenes in the city of Hué captured at Beckton Gasworks in the Isle of Dogs. The gasworks had been built by a company of architects who’d worked in Hué, and the Docklands location only needed a few details added before it became the site of the action. Kubrick’s ability to work with believable reconstructions is also evident in his final film, Eyes Wide Shut (1999), which was set in New York’s West Village and filmed at London’s Pinewood Studios. He sent a set designer to photograph and measure shop fronts, the width of streets, and distances between locations and recreated the area, complete with faded shop signs, jazz dives, and apartment buildings.

Accuracy also drove the set design of The Shining’s (1980) Overlook Hotel. “We wanted the hotel to look authentic rather than like a traditionally spooky movie hotel,” Kubrick told Climent. Designed like a labyrinth, with impossible corridors and rooms, the oppressive space disoriented even the actors and crew. It was spacious and modern compared to the tradition of dusty horror sets, and rather than building tension out of claustrophobia, it achieved it in the use of high ceilings, elaborate patterns, and vast expanses that would dwarf its characters.

The Overlook’s interior was based on American hotel rooms photographed by the set designer, Roy Walker. Kubrick felt that in order to really affect his audience, the film needed a balance of realism and fantasy that he likened to author Franz Kafka, who balanced fantastical, allegorical stories with straightforward writing. The idea of taking a familiar space and turning it on its head is evident in much of Kubrick’s work. “I’ve never been able to decide whether the plot is just a way of keeping people’s attention while you do everything else,” the director once mused, “or whether the plot is really more important than anything else, perhaps communicating with us on an unconscious level which affects us in the way that myths once did.”