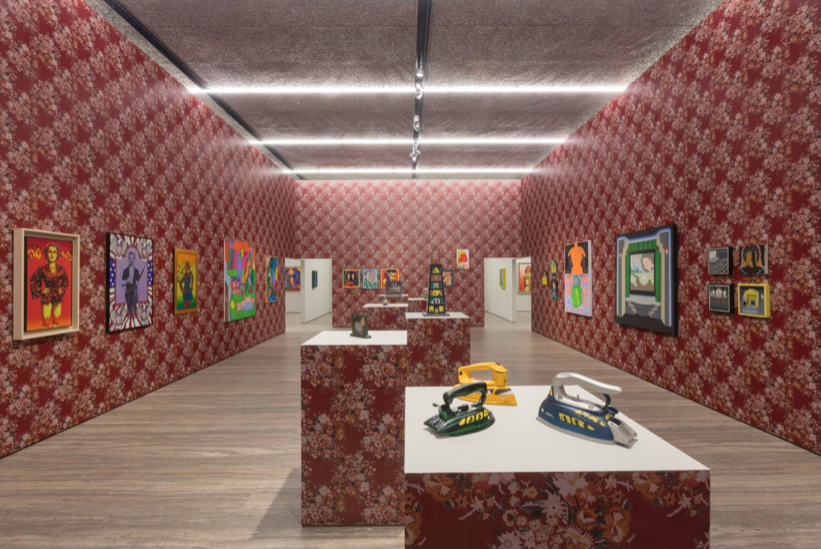 Artist and curator Don Baum had been teaching at Chicago’s Hyde Park Art Center for close to a decade when he started exhibiting the work of under-represented Chicago artists. It was the early 1960s and Baum’s exhibitions – a mix of group shows, with themes including ‘Animal’, ‘Vegetable’, and ‘Mineral’ – were put together on a shoestring, the focus being on the community that surrounded the artists, as well as the work itself.

The Hairy Who (and/or The Monster Roster, Nonplussed Some and Chicago Imagists, as they were also known) was founded as a group – and as an exhibition title – when Baum offered Jim Nutt, Gladys Nilsson, Suellen Rocca, James Falconer, Art Green and Karl Wirsum a show at the Art Center in 1966. Their work was both aesthetically and thematically in opposition to the New York School, and while those artists were delving further into abstraction and although satirical, nonetheless glossy, escapist Pop; the Hairy Who, and their Chicago contemporaries, were engaging with the grotesque, hysterical and at times psychotic nature of life in post-war America.

For the Art Center exhibition, The Hairy Who – and later their 1969 exhibition, Don Baum says ‘Chicago Needs Famous Artists’ at the Museum of Contemporary Art, Chicago – the artists covered the walls with a flower-patterned linoleum, with the express intention of having their audience experience the work in visually complex circumstances. For Fondazione Prada’s newly opened exhibition, Famous Artists from Chicago, the curator – and the Fondazione’s Artistic Director – Germano Celant mirrored the original setting.

On entering the gallery, you are met with a secondary route through to a room that has been built within the gallery walls, in which the group’s work is shown as a collective entity. A mass of wobbly, naked, fuzzy bodies; psychedelic stagings of suburbia; elaborate, flaming dreamscapes; and graphic expressions of delusion and dare; beyond the collective introduction, the exhibition peels off into individual sections, in considerably more ordered, traditional gallery settings. In doing so, each artist is given their moment at centre-stage, but the calm belies what was the strength of The Hairy Who: their focus on collective, noisy social commentary.

In an interview for the accompanying exhibition publication, Germano Celant spoke of how: “They did not passively accept reality like mechanical recorders in the manner of Warhol, but rather explored contemporary society with malice and irony.” He continues, “… they created visual subversions that contemplated the destruction of the body, and the ambiguity of existence leading to inhuman transformations. They focus solely on a moral argument, but attempt[ed] to push forward, awake and aware…”

In the surrounding galleries, above and adjacent to Famous Artists from Chicago, Celant curated concurrent exhibitions of the work of Leon Golub and H. C. Westermann, both of whom lived and worked in Chicago after the second world war. Westermann, born in 1922, studied applied arts at the School of the Art Institute, Chicago, after serving in the U. S. Army as a Marine. Initially stationed in the South Pacific, and later in Korea, through his work Westermann recorded his traumatic experiences and anti-war politics. Working predominately in wood, in which he carved parts and images of boats, as well as assemblages and hallucinatory narratives, the forms in his work, as they are described in Celant’s essay in the exhibition catalogue: “oscillate between humour and ambiguity”. “On one hand, between a diving airplane and an atomic bomb, a penetrating penis and a figure with arms open in a gesture of surrender; and on the other, between a collapsing building and a book immersed in a void, heralding the end of the world and a return to the life of a savage.”

As is the case in Famous, the interior architecture of the Fondazione is utilised here, too. Westermann’s larger, sculptural works – in wood, metal and enamel – form a sort-of army, or front, defending the more revealing narrative works in wood and on paper, which are mostly hidden on entry. His practice embodies both a criticality of the brutality of war and its motivations, and a nostalgia for the fantastical stories of old Hollywood; and Westermann’s titles speak to that. They include, A Piece for the Museum of Shattered Dreams, Swingin’ Red King and the Silver Queen, Coffin for a Crooked Man and Where Angels Fear to Tread; and while his work is known for its craftsmanship, Westermann qualified in an interview with gallery director Martin Freedman and art critic Dennis Adrian in 1966, that: “To me craftsmanship is very secondary, actually”. “As I said, I like quality, but I like quality of ideas first, quality in politics, or quality in business. What the hell’s the difference?”

Golub’s concerns were rooted in his experience of American imperialism, but not limited to the conflicts the U.S had been involved with. He was equally interested in those that had gone unnoticed, developing timelines of concurrent wars and conflicts through his lifetime, and proving the interchangeability of the global paramilitary condition. In his installation works – where he manipulated and altered images of conflict, and presented them on layered photographic transparencies – Golub spliced recognised historical narratives, from the tragedies of the antiquity to the first televised war.

At the close of the second world war, figurative, expressionist practice was conflated with Socialist Realism and, particularly in the U.S, an aesthetic was sought that would assert the concepts of individual freedom and personal enterprise (i.e. The American Dream). This saw the onset of New Abstraction and Pop, and a so-called “depoliticised radical practice”. But Golub, as Celant describes: “Avoid[ed] the whisper in order to denounce loudly the terrible and dark situation in which the world itself.” And with H. C. Westermann, The Hairy Who, and countless other artists working outside of the New York School, he avoided the futile and the frivolous.

Although, “I would dare to claim that despite the apparent pessimism or negativity of the subject matter, in the reportage, retains a residual optimism”, as Golub said in 1996. “It’s in the very freedom to tell. In the freedom to make and exhibit these paintings.” 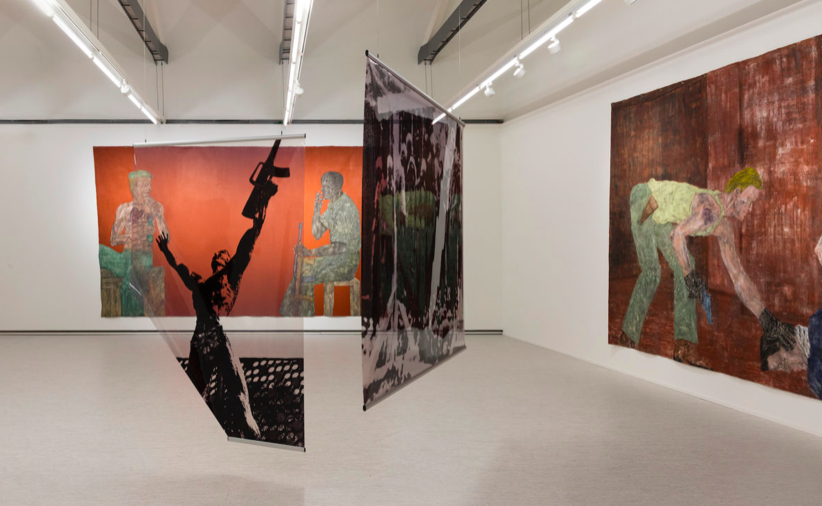