If you take a Joker boat from Bodrum’s waterside Starbucks, you reach the island that carries the Castle of St. Peter, built by the Knights Hospitaller — a mediaeval and early modern Catholic military order — in the late 15th Century. It was constructed in part from the ruins of the Mausoleum of Halicarnassus, one of the seven wonders of the ancient world, which had been erected in 350 BC and destroyed by a series of earthquakes over the following centuries. The Mausoleum, or Tomb of Mausolus, had been built for the ruler of Caria and his sister-wife Artemisia II of Caria, when Bodrum was the ancient Greek city of Halicarnassus.

Soon after its completion, the castle was attacked by Sultan Suleiman the Magnificent and the Knights surrendered it to the Ottoman Empire. It became a mosque, then a military base, a hamam, a prison, a garrison, and finally, in the 1960s, a museum of underwater archaeology. In recent years, the Halikarnas nightclub — which sits on the outer edge of the Bodrum strip — has projected enticing messages in neon green light onto the castle walls: **LADIES NIGHT**, **FREE DRINKS**, **IMPORTED DRINKS**. 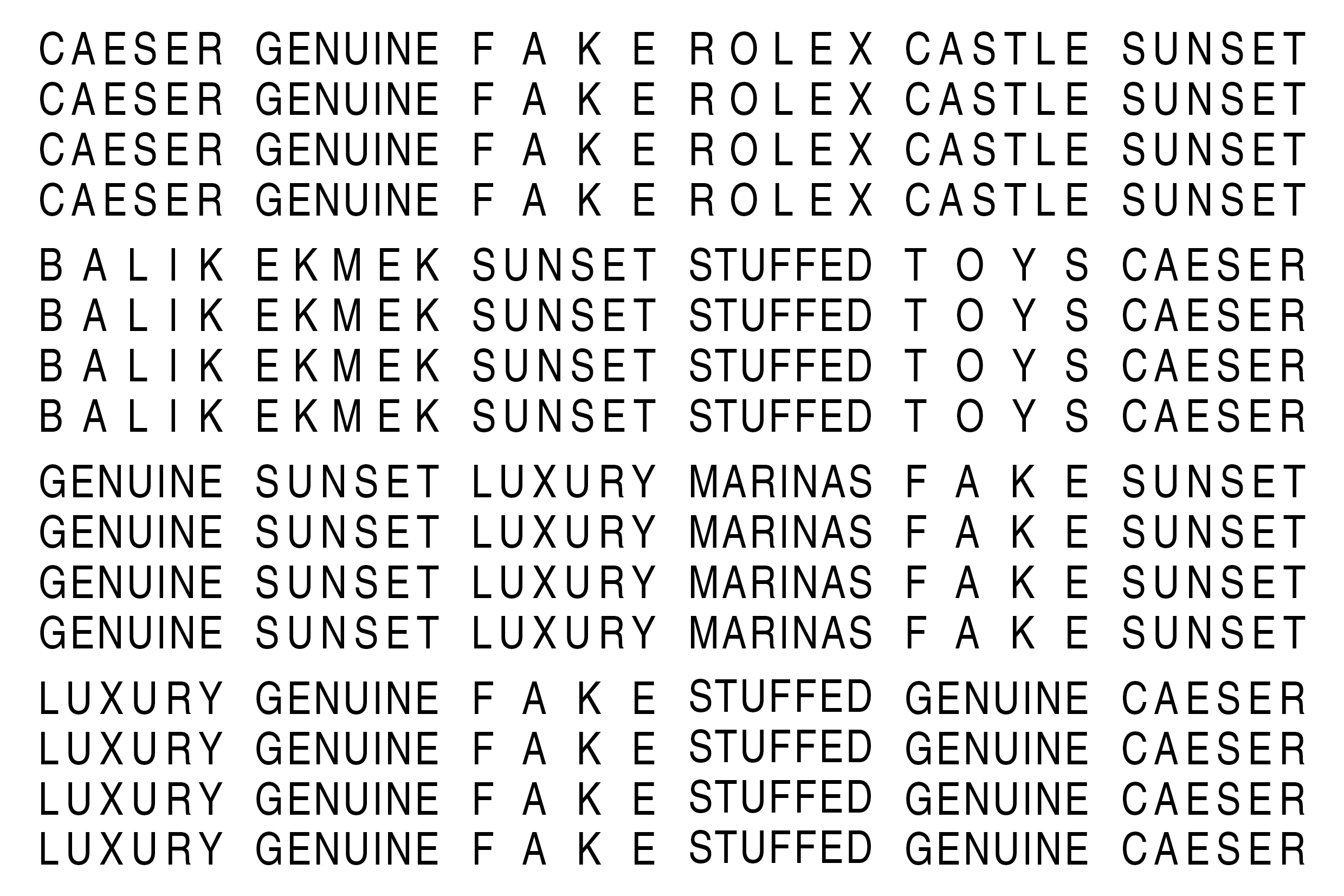 The high columns that frame Halikarnas date back to 1979, but since its closure was announced by founder Suleyman Demir at the close of the last decade, its mock historic architecture is now destined to become a ruin. A temple of entertainment, the Halikarnas website boasts visits from: “Bette Midler, Dustin Hoffman, Princess Margaret, the Rockefellers, Valentino, Sting, Richard Branson, Phil Collins, Michael Caine, the Blues Brothers, Ronald McDonald, Pamela Anderson, Kid Rock and Naomi Campbell”. There was a restaurant designed by Jade Jagger, and an Arabesque Lounge, which encouraged its guests to “indulge [their] taste for the Oriental”: “Enter a world of relaxing water pipes, indulgent divans and special cocktails with a touch of ‘Eastern Promise’.” Bodrum, or Halicarnassus (or Halikarnas), having criss-crossed between empires, religions and nations since early civilisation, now stands as an example of how histories can layer up, change direction, be built over and projected on. Ancient ruins sit beside moulded replica statues (“Perfect for your garden!”), the ANCIENT RUIN estate agent sells holiday villas on spec, and imported camels sit on the side of the road, ready to indulge tourist ignorance.

On the north side of the highway running from Bodrum Airport to the city, which cuts through pine forests and gourd-laden villages, past cut-outs of police cars and stacks of honey on the side of the road, is the Sedative Boutique Hotel and Spa: “In a world of its own, both intimate and stylish, offering very high class service with the added qualities of personalised attention in an elegant beach front setting.” Self-identifying as “understated”, its roadside signage is gilded in gold leaf, S-e-d-a-t-i-v-e spelt out proudly in Baroque serif, promoting calm, in a sparkling, high gloss example of how easily things can be lost in translation. Or was it all on purpose? 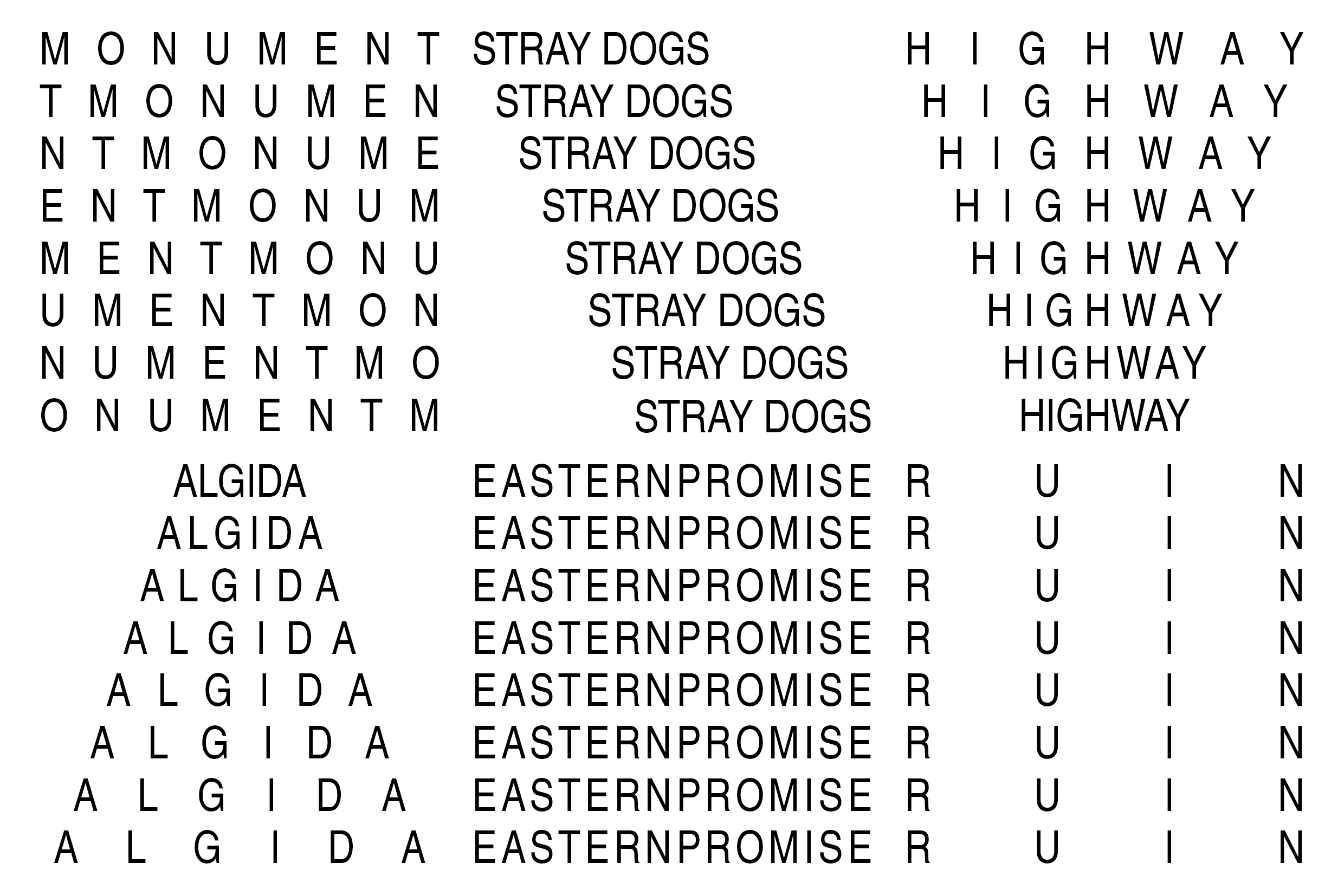 Literal translation, or straight-forward readings of places, people and practices, leads to a flattening out (or exaggeration) that obscures history, but that instinct can also, at times, be optimised — the importing of camels being a case in point. Often, it’s places that contain and sit at the junction of complex histories that are most capable of playing a little fast and loose with assurances of authenticity.

Growing up, I visited the Bodrum peninsula every summer with my family. My Dad was born in Istanbul, to Turkish-Jewish parents, who’d emigrated from Bulgaria and Spain on one side, Russia and Greece on the other. My brother and I were born in the UK, as was my Mum, to British-Irish parents, and we’d meet with my extended Turk-ish family — who lived in Istanbul, Sydney, Tel Aviv and Paris, further elaborating on our already “soupy” sense of identity — grounding ourselves in the inconsistencies and contradictions of the landscape.

The sound of cicadas, the call to prayer, the call for “ALGIDA”; the sight of bougainvillea, white houses, geckos; the smell of mandarin, sweetcorn, pine forests, cumin, dill or pul biber, all feel like home. A sense of home that’s both strange and familiar, foreign and integral, to which I’m connected by a sort-of muscle memory, but disconnected from. Embracing that means collapsing assurances about identity and connection; allowing disconnections, misunderstandings, and a lack of clarity to be precisely what binds you. It’s home always accessed from a distance. 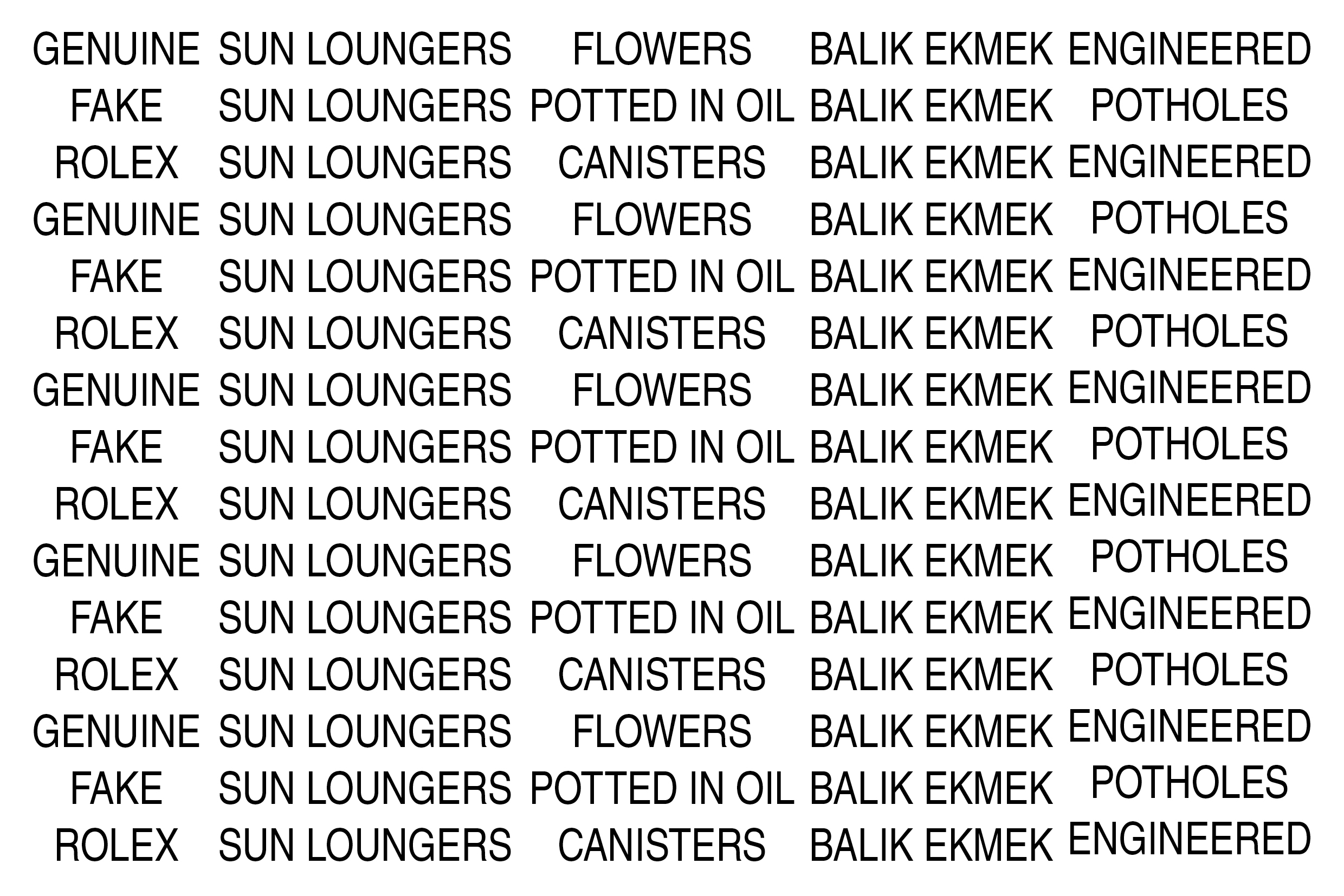 The drive along the coastal road from Bodrum-Milas airport (if you turn right towards Torba, just beyond the Sedative Hotel) takes you through the fishing and hillside farming villages that surround Bodrum (as well as past countless golden mega hotels and cités), and along the hillside cliffs that drop into the Aegean Sea. Along it, like the highway, are streams of billboards, and roadside attractions.

Round the blind corners and along the sheer drops, past the busy roadsides and on the chaotic roads, you eventually reach a particular village that’s built around Hellenic ruins —
the sunken walls of the ancient city providing a route across the sea to a small island inhabited by rabbits. Myndos, now Gümüslük, was an ancient Dorian colony — one of the four major ethnic groups among the Hellenes of Classical Greece —of Troezen; it’s thought that an unrecorded earthquake caused the seafront sections of the ancient town to be submerged. It was designed, like Halicarnassus, with the intention of accessing and controlling the surrounding seas – particularly the straits between the Anatolian mainland and the adjacent islands of Kos and Kalymnos – a principle that features in Shakespeare’s Julius Caesar, who set Brutus and Cassius’ fleet base at Myndos during the battle of Philippi, which followed Caesar’s assassination.

Myndos, or Gümüslük, is protected by a bay that juts out to the south and curves round the town’s beachfront from the north-side. No longer a working harbour, fishing boats still moor there, and yachts and gulets drop their anchors further out in the bay, taking advantage of the protection it provides from the weather of the open water. Beyond the hill that faces the town, the sun performs its daily ritual of dropping from the sky into the sea, lending the sea a silver glow; giving it a sense of unfamiliar magic for those who find a sense of home in the blue of the water.

Originally published by This is Badland.